Difference between revisions of "Hairpin formation"

In this example, you will simulate a single strand of length 18 and sequence GCGTTGCTTCTCCAACGC at 334 K (~61 °C) in three different ways:

The traps act between the pairs depicted in blue and red in the sequence GCGTTGCTTCTCCAACGC. The details of the interaction associated to the traps can be changed in the file hairpin_forces.dat.

This strand, if T is sufficiently low, tends to form an hairpin with a 6-base long stem and a 6-base long loop. The temperature has been chosen to be close to the melting temperature of such a hairpin in the SA version of the model

This document explains how to prepare the hairpin example (see Preparation) and how to run it (Running). Section Results contains results and plots extracted from the simulation output. In the following, $EXEC refers to the oxDNA executable.

The script run.sh generates the input files and runs all the three simulations, one after the other. With the default input files, each simulation, lasting

steps by default, takes approximately one hour on a modern CPU. The default run.sh expects $EXEC to be in the ../../bin directory . If this is not the case, open run.sh and change the variables CODEDIR and $OXDNA_BIN accordingly.

In order to run the whole example, it is sufficient to issue the command ./run.sh (or bash run.sh). As described in Preparation, you can generate the initial configuration and then run the simulations by hand. The three simulations, described in Introduction, can be performed issuing $EXEC input, where input is a text file that specifies the simulation configuration. For this example, three files have been prepared: inputMD, inputMD_seq_dep and inputTRAP. The table below reports all the files associated to each simulations.

As mentioned in the introduction, temperature has been chosen so that the hairpin is near its melting temperature when simulated via SA model. Figure 1 shows the probability distribution histogram

for the hydrogen-bonding (HB) energy

of the system (in simulation units).

is stored in the second column of the HB energy file as a function of MD steps. Both the minimum in

and a direct inspection of the time series (inset) show that the hairpin is indeed near the melting temperature, since

oscillates between 0 (no HBs) and ~ -3.5, which corresponds to 4-5 hydrogen-bonded nucleotides. At this temperature the fraying effect is relevant, and therefore the last base-pair is not always formed. 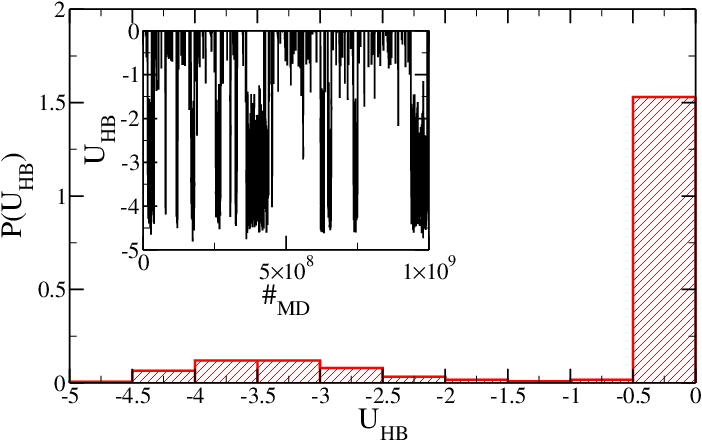 Figure 1: Probability of having a hydrogen-bonding interaction energy

for the SA model. Inset: time series of the hydrogen-bonding energy.

for the SD hairpin. In this case, one expects a different melting temperature. Indeed, at this temperature the hairpin is nearly always in its folded conformation and the average value of

is lower than in the SA case. Although stacking interactions play a role, the major contribution to this effect is due to the presence of four GC only two AT base-pairs in the stem. 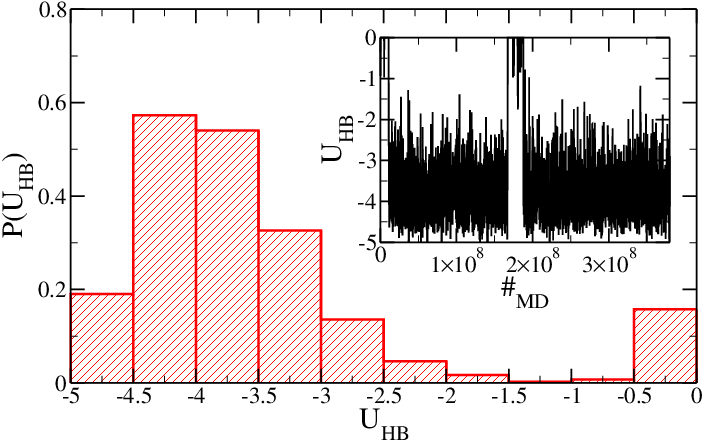 If mutual traps between stem base-pairs are introduced, then the equilibrium properties of the hairpin are changed and, even if the SA model is employed, the hairpin is always (after the initial equilibration) in its folded conformation. The use of mutual traps can highly decrease the simulation time required by the folding of strands into target structures (like DNA origami or DNA constructs). 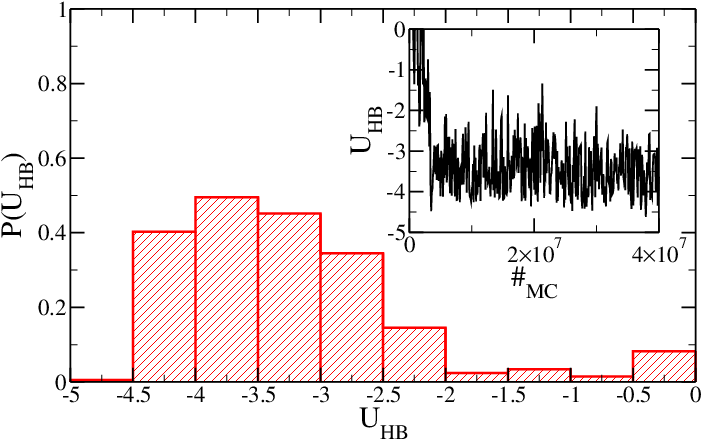 Figure 3: Same as Figure 1, but for the system with mutual traps. Time is expressed in Monte Carlo sweeps.